Snow at the Creek

Posted on April 13, 2019 by Lone Tree Farm on Kanaranzi Creek 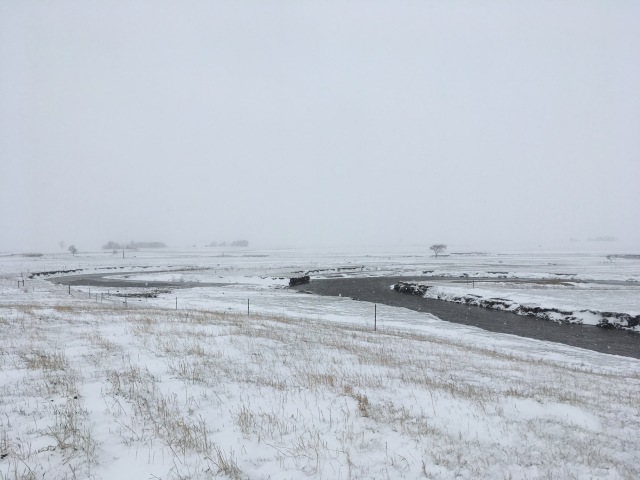 At one time the Kanaranzi Creek made a big loop out to the west at this location. But, in 2014 the bank caved in and a new channel cut through to isolate the old bend as a pond and wetland. Now the main flow is in from the lower right/north and hooks out to the right, while the wetland pond is shown as a narrow gray strip of water on the left/south.The picture above also shows how little snow we’ve got here from this latest storm. 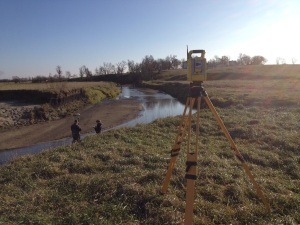 The old abandoned meander is technically called an “oxbow” because it’s shaped like a yoke used for a team of oxen. The Minnesota Department of Natural Resources had been measuring bank erosion at this location since 2012 in anticipation of the meander cut off. For the past five years, the survey team has continued to monitor the modifications made by erosion and deposition. Eventually, this will give us a picture of how the geometries of the oxbow and channel have change. 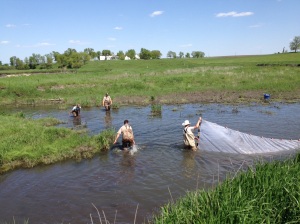 The U. S. Fish and Wildlife Service has seined the oxbow twice in the last several years. They found more than 15 different kinds of fish, including the Topeka Shiner that is an indicator species for a healthy stream environment. The diversity in the fish population was mirrored in the diversity of the last team that did the sampling: there was only one “token” guy in the group of five or six biologists.

There’s also an exotic frog living in the oxbow. One of our relatives who is a herpetologist (And yes, herpetologists who study amphibians and reptiles actually do have families!) identified a relatively rare little cricket frog. It has a distinctive call that sounds like hitting two rocks together and the species has only recently returned to Minnesota from Iowa. In this case, the trip was only about one-quarter mile because Iowa is just across the gravel road to the south of the oxbow. But, this guy is also an indicator of a healthy stream environment. Right now, however, they are probably all hunkered down in the mud waiting for warm weather. Aren’t we all?