This tree fell into the Creek channel sometime in the last two or three weeks. When we first moved back to the farm 18 years ago, I thought about measuring the distance from the tree to the edge of the bank. But, that job didn’t get done and now the distance is zero because the tree is in the Creek.

My Grandma Daisy Walker Shurr used to claim that the word “Kanaranzi” meant “runs as the crazy man walks”. I’ve heard of other translations of the word since then, but her definition seems pretty accurate to me. The Kanaranzi Creek has lots of curves and bends and that meandering channel is constantly changing.

Erosion is usually greatest on the high banks located on the outside edges of meander loops. That’s what happened to this tree. The channel shifted sideways more than 10 feet in the past 10 years to give an erosion rate of about 1 foot per year. That’s very similar to actual measurements of bank movement that we have from other parts of the pasture. 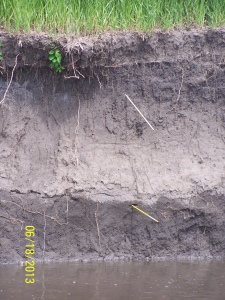 In 2012 the Minnesota Department of Natural Resources started annual surveys of the multiple meander loops that eventually cut off to form our oxbow and wetland. Part of that data collection included driving “pins” about 4 feet long into the high bank. Every year the exposed pins were measured to give estimates of erosion rates as high as several feet per year.

A few years before that, I had used historic air photos to measure similar rates of lateral migration on the outside of meander loops. It’s important to recognize that these estimates are maximum rates, which change a lot from year to year and from one location to another along the channel. However, the numbers do show how much and how fast the channel changes.

Here’s another tree that recently fell into the eroding channel. But, this one is special. It’s located at the base of the bluff just north of our house and was a place where magical staffs and other treasures have been stored because it was hollow. Now instead of storage it may become a bridge across the Creek until it gets swept away in the next flood.

These trees and the changing channel are metaphors for all of the constant changes and evolution here on Lone Tree Farm. It’s nice to be able to visit familiar old secret places, but things change and so do the people. Five generations of kids have played at the Creek and through the years the channel and the times have all changed.