Boulders at the Creek

Posted on April 8, 2016 by Lone Tree Farm on Kanaranzi Creek 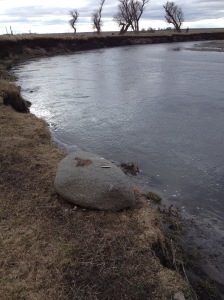 This big boulder “magically” appeared alongside the Kanaranzi this spring. The pocket knife shows the size. This big guy is about 3 ft by 1.5 ft and is about 1 ft thick.

It’s not the first heavy object that turned up in the pasture after the spring floods. This TV set is still over near the State Line Bridge. 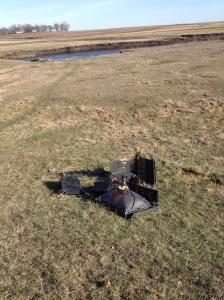 We thought that someone had dumped it there two years ago, but the story is more complicated. Neighbors have told us that it was originally upstream in the thicket of trees locally known as the Jungle. That’s about a mile away up the valley near the Rainbow Curve.

So, how does our little bitty creek manage to move these big objects? The running water normally carries gravel and sand and clay, but these two things are too heavy to move that regular way. It’s geology in action….. 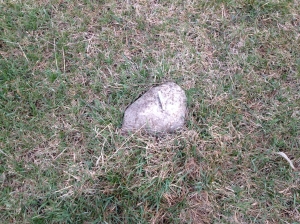 This smaller boulder has the explanation. Several years ago I saw this rock perched on top of big ice slab. The raft had landed at some distance back from the channel after the spring flood and it deposited its load after the ice slab melted.

There’s your “scientific” explanation for the mysterious appearance of large items after the spring flood. But, it’s not an account that you’d find in a textbook or journal article. It’s based on the dumb luck of seeing a rock perched on an ice raft and then making the interpretive leap to the big boulder and the TV set.

The TV set is still over near the bridge. It’s heavy, but we should clean up the environment. However, we’ll leave the rocks where they have originally landed.

1 Response to Boulders at the Creek